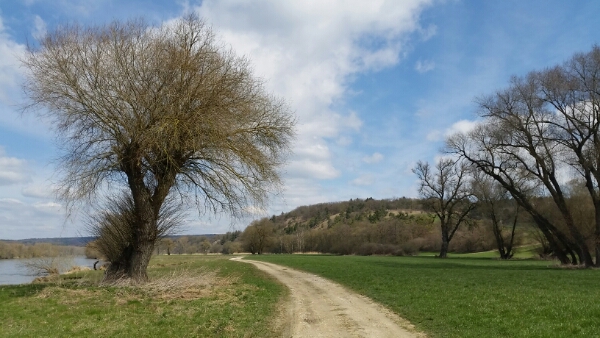 I can’t help but think of the Lou Reed song title What a perfect day! I did not have Sangrias in the park but otherwise this day was close to perfect. The sun was shining, the weather was pleasant, the scenery magnificent and the cold of the last two days soon forgotten!

After the previous day’s exhaustion, where even my blog went out with some grammar errors – sorry about that – I sort of woke up at about seven and started to pack all my stuff I had spread out all over the hotel room to dry out. Hammock and sleeping bag where dangling between door and cupboard, plastic sheeting and clothes were lying all over the place. To reach the bathroom was like going through a labyrinth. At nine my rucksack was bursting out of the seams again and I went down to have breakfast. Too much breakfast. Way to much breakfast! Hey, who knows when the next meal will come and seeing that I paid for it anyway…

About 4km out of Neustadt I reached the Donau river which became my companion for the day. Although the lady from my GPS wanted me to cross the river with a ferry I had to disappoint her as it was not operating that day. I had to stay on the smaller path on this side, but now at least I can tell you that the river is about 110m wide because she kept on saying You left the tour. The path is 120m to the left.

Walking next to the river was so nice after the up and down forest paths of the previous days. It was a luxury that was not to last all day long. At midday I reached the beautiful monastery at Weltenburg

As you can see in the next photo, I had to make a MASSIVE climb up a very rocky forest path to get further. But it was so worth it!

Eventually the path came down to the river again and it was smooth sailing on a paved walking path all the way to Kehlheim. I was so filled with impressions of the day that I decided that I would save the money for a hotel bed and rather have a feast of a meal.

Later on I walked (or rolled?) back to some caves I had passed on my way to spend the night there.

Having a full moon shine into the cave compensated for slight discomfort of the hard floor. I was glad that it was the moon and not the chattering of my teeth that woke me this time.

I knew I had quite a way to go that day so I tried to get an early start. For breakfast I only got the glorious sunrise. I pushed forward for 20km and reached Bad Abbach at noon. Here I treated myself to a visit at a sauna and swimming pool centre. I had to smile while thinking back to the tiny two person sauna at the spa where I worked, and here I was at the real McCoy: a choice of 55deg, 85deg, 100deg, 80deg Aroma and 80deg panorama view sauna. Even the smallest one could seat 6-10 people. There were even numerous different ways to shower. Plus the steam baths, inside and outside jacuzzis, inside and outside pools, different relaxation areas etc, etc. Heaven!

At 6pm I forced myself to go as I knew I still had another 15km to go. I needed to reach Regensburg so that I could catch a train back to Munich. The first hill out of Bad Abbach was so steep that it felt like I sweated just as much as in the 100deg sauna. And that was just the first one on this stretch. Rather exhausted I reached the youth hostel where I had booked a bed for the night at about 10pm just to find that I still had to make my own bed in a dark dorm room with six other guys who where already sleeping. Don’t know if I will do the youth hostel thing again. I think I would prefer the cave…

At least the breakfast was very good again. I love German bread rolls!

I had some time and strolled through town to look at the Cathedral and other historical buildings before making my way to the station. Back in Munich I checked into the hotel, did some shopping and took a walk to the academy where I was going to start my first course on the next day. I will return to Regensburg on the 16th to continue my tour.

Even if it was rather ironic that the road I had battled for the last six days took a train two hours to return me to square one, I was happy to be where I was. In front of the sign that said “Lebe deinen Traum” – Live your dream!